The Boy in the Striped Pajamas by John Boyne

The Boy in the Striped Pajamas is the story of an innocent and ignorant boy whose father is the commandant of the concentration/death camp Auschwitz in Nazi-controlled Poland during World War II. Though the book is written in third person/omniscient point of view, the author has Bruno use his unknowing voice, calling Auschwitz “Out-with”, and the Fuhrer (Adolf Hilter) “the Fury”, to show his true misunderstanding of all that is actually happening around him.


Storyboard That also offers an extended image pack (included with subscription) which contains graphic imagery, including Holocaust victims and Nazi soldiers and symbols; due to the nature of this material, it is hidden by default. Modify your account settings.

Student Activities for The Boy in the Striped Pajamas Include: 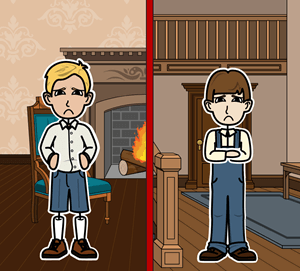 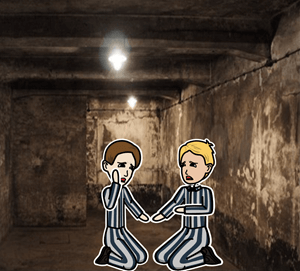 
The Boy in the Striped Pajamas Summary

The Boy in the Striped Pajamas begins with a young Bruno frantically trying to figure out why his maid is touching and packing up all of his things. He wonders if he has done something wrong. He is a young boy during World War II, the son of a Nazi commandant, living in Berlin. Due to his father's sudden promotion, Bruno and his family are forced to move to the Auschwitz Concentration Camp in Poland.

Bruno is unabashedly against the move, protesting loudly to his mother and to his maid. After the move, Bruno sulks, inconsolably, at the loss of his Berlin home and friends. He is bored and lonely. He is also under strict orders not to explore too much, due to living in such close proximity to a concentration camp. This is difficult for Bruno to accept because he wants to be an explorer when he grows up. He is, however, ignorant of what the Nazi party does to the “guests” of the camp. He thinks that the camp is full of farmers.

When playing outside, Bruno falls off of a tire swing. When he goes inside, a man tends to his cuts. He tells Bruno that he is a doctor. Bruno doesn’t understand why a doctor of medicine would quit to tend to his family. The man is a prisoner of “Out-with” (Auschwitz) and has been forced into servitude. He also will get in trouble if someone learns he had touched Bruno. When Bruno’s mother finds out about it, she lies to her husband and says that she tended to his injuries.

Bruno decides to disobey his parents and go past the walls of their yard. Quite a distance from his home, Bruno comes upon a section of fence, and behind it is a boy about his age. He sits down and befriends the boy. Bruno has lots of questions, many of which the little boy, whose name is Shmuel, cannot answer. Bruno visits Shmuel many times. Quickly, they become the closest of friends. It seems that Shmuel understands more about what is happening than Bruno, yet he still seems innocent in some ways. Bruno smuggles all kinds of food and goodies to Shmuel as often as he is able. Meanwhile, Bruno's mother is becoming increasingly disgusted with what is happening with the prison, and Bruno’s sister Gretel’s love for the Nazi party is becoming stronger.

One day, Bruno begins to talk about Shmuel coming over to his side of the fence, but Shmuel says it is not allowed. Knowing that was true, Bruno says he could go over to Shmuel’s side. Shmuel didn’t understand why anyone would voluntarily come to his side of the fence. Bruno tells Shmuel that if he gathers some worn striped pajamas, then Bruno could truly fit in with that special community. Shmuel knows where to find some for him.

When the day ends, Bruno is so excited. He runs to the fence with joy, and Shmuel is happy to see Bruno. Bruno squeezes under the fence, leaving his clothes behind. He quickly gets into the ill-fitting and unwashed garments. The two boys begin to look for Shmuel's father and somehow end up in a large group. It is raining and the guards march the group into a gas chamber. Bruno is scared, and so is Shmuel. They hold hands.

The doors to the “shelter” close, the gas pours in, and people begin to scream. Bruno has accidentally been put to death by the Nazis. Bruno’s mother realizes what has happened when she sees the pile of clothes next to the fence. Everyone goes looking for poor little Bruno. They never find him.


Essential Questions for The Boy in the Striped Pajamas