Often in life, we come to a crossroads where we have to make a decision that will impact the path our lives will take from that point forward. Dante Alighieri (usually referred to by his first name) was exiled from his beloved city of Florence because of political affiliations and contractually married to a woman he did not love while the woman he did love died at the young age of 24. He found himself as an older man trying to figure out why his path in life had brought him to this point. He creates an imaginary journey for himself, which later became known as The Divine Comedy, in which he envisioned himself passing through the three spiritual realms: Hell (Inferno), Purgatory (Purgatorio), and Heaven (Paradiso).

At the beginning of the Inferno, Dante finds himself lost in the Dark Wood of Error, where his path to the Mount of Joy is blocked by the Three Beasts of Worldliness: The Leopard of Malice and Fraud, The Lion of Violence and Ambition, and The She-Wolf of Incontinence. Luckily, the great Roman poet Virgil, who represents Human Reason, appears and offers to guide Dante on his spiritual journey through the nine circles of Hell. Dante would eventually be met and led to the Mount of Joy by his long-lost love Beatrice, who symbolizes Divine Love. By the end of his allegorical journey, Dante hopes to come to a better understanding of himself, his situation, and to be at peace with his exile. Shortly after Dante completes The Divine Comedy, he passes away at the age of 56, never to see his beloved Florence again.

Student Activities for Dante's Inferno Include: 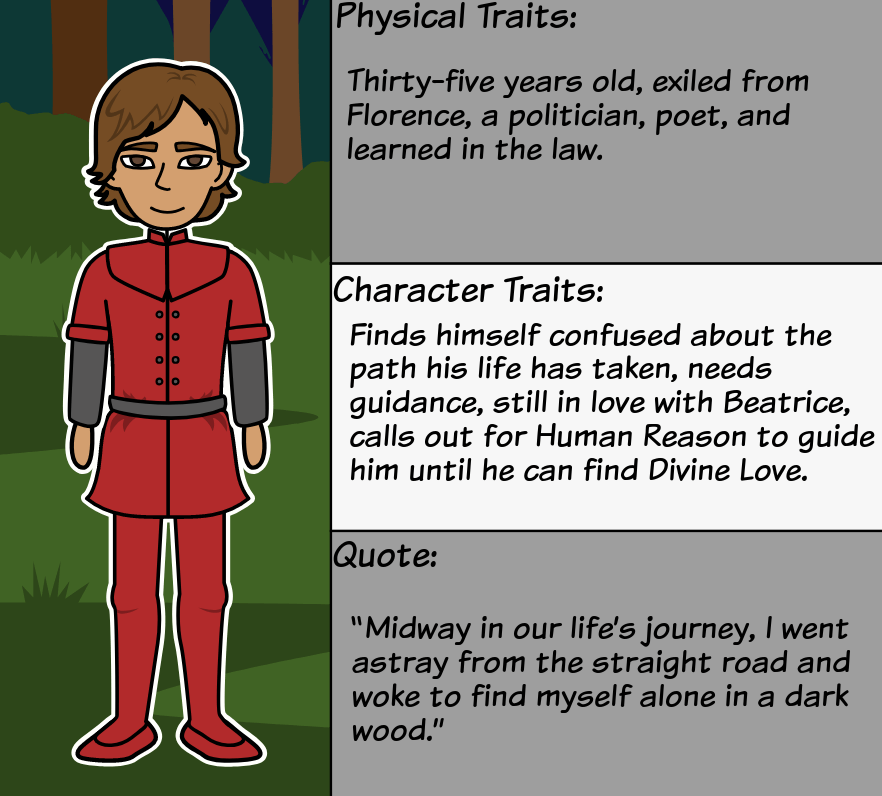 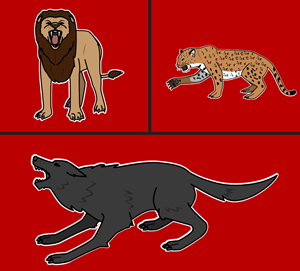 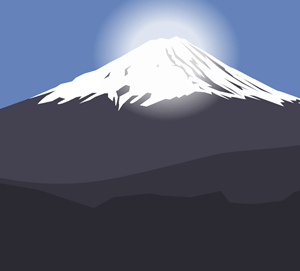 Create Your Own Inferno 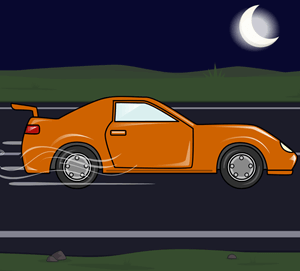 Note: The Divine Comedy is a long poem divided into 100 sections, called “cantos”. Inferno comprises the first 34 of these cantos.

It is Good Friday, and Dante is 35 years old. He realizes that he has strayed from the True Way into the Dark Wood of Error. He sees the Mount of Joy, where he knows his happiness lies, but his path is blocked by three terrifying creatures: The Leopard of Malice and Fraud, The Lion of Violence and Ambition, and The She-Wolf of Incontinence. Desperate, frightened, and alone, Dante feels like there is no hope to get past the beasts. All of a sudden, the great Roman poet Virgil, who represents Human Reason, appears to Dante and offers to bring him away from the beasts to the Mount of Joy. They have to descend through Hell first, which represents the Recognition of Sin. Virgil explains to Dante that he will then have to ascend through Purgatory, representing the Christian life, where he will be met by Beatrice, who will take over for the final ascent to Paradise, which represents the soul’s ascent to Heaven and to God. Virgil explains to Dante that he will see a series of spirits in various levels of torment, according to the severity of their sins.

Virgil explained that Dante’s long-lost love Beatrice chose him personally to guide Dante on this journey, because he has a way with persuasive words. Dante is grateful to Beatrice, and is buoyed by the fact that Beatrice is still looking out for him from the spiritual realm.

Virgil and Dante come to the gates of Hell, inscribed with the now-infamous words, “Abandon all hope, ye who enter here.” Through the gates, in the “vestibule” of Hell, are souls known as The Opportunists. They chose neither evil nor good in their lives—only themselves. The angels who refused to take sides in the Great Rebellion in Heaven can be found in this level, too. The souls in this level run fruitlessly, chasing a waving banner that they can never catch. While they run, they are pursued by wasps and hornets whose stings make the souls bleed. The blood drips down to feed worms and maggots which infest the ground. Dante recognizes one soul, Pope Clandestine V, who gave up his papal throne just five months after being elected. This abdication paved the way for Pope Boniface VIII, who exiled Dante from Florence.

Dante and Virgil notice a horde of souls gathering on the banks of a river awaiting Charon to ferry them to the other side. Charon initially refuses to allow Dante entrance into Hell, because he is still living, but Virgil convinces him. Dante is so terrified that he faints, and doesn’t awaken until the end of their ferry ride.

The first level, or circle, of Hell is called Limbo. The unbaptized and the Virtuous Pagans (like Julius Ceasar, Euclid, Aristotle, and Virgil himself) reside in this level. They cannot be admitted to Heaven, but are only punished by living in a lesser version of it.

Moving on to the second circle of Hell, the poets’ path is blocked by Minos, the ancient King of Crete. Though a tyrant, he was known for his wisdom and justice, which made him the perfect candidate to judge the dead. Dante paints him as a hideous monster with a tail, because the job he is doing is so monstrous.

Virgil convinces Minos to let them pass, and he and Dante comes to a ledge where they observe souls being swept away in a whirlwind. These are the souls who betrayed their reason to their carnal appetites. As punishment, they are swept through Hell in a tempest, much like the tempest of passion they gave themselves to while on Earth, and they are forever denied control over their movements.

Among these souls, Virgil points out many famous lustful figures, including Dido, Cleopatra, Helen of Troy, Achilles, and Paris of Troy. Dante calls to one couple, Paolo and Francesca, to tell him their story.

Francesca was once a very well-known woman of high royal birth from Ravenna, Italy. She was trapped in a loveless political marriage and she had fallen in love with her husband’s younger brother Paolo. When her husband discovered their affair, he murdered them both. Dante is struck by Francesca’s story and the unfairness of their torment, perhaps because it hits so close to home with his own life’s story, that he weeps. Paolo begins to weep as well. Dante then faints again, so overwhelmed by the sights and sounds and stories of the souls around him.

After descending through the third and fourth circles of Hell (Greed and Gluttony), Virgil and Dante reach the fifth circle (Anger) and the city of Dis, which marks the division between upper Hell and lower Hell. The poets begin to witness punishments by fire, the motif most associated with modern-day depictions of Hell.

In the sixth circle, they find the shades of those who committed heresy, or denied the true Christian path. Most of the souls here followed the teachings of the Greek philosopher Epicurus, who taught that the spirit dies with the body. As a result, all of the shades are sentenced to live in open tombs surrounded by fire until Judgment Day, when the tombs will be sealed.

Among them is Farinata delgi Uberti, who led the political party that Dante and his family opposed, and Calvacante dei Cavalcanti, whose son, Guido, was a good friend of Dante’s. Cavalcante wants to know why his son is not with Dante, and Dante’s ambiguous answer leads Cavalcante to believe that Guido is dead. He falls back into his fiery tomb in despair. Farinata interrupts and begins rehashing old political disputes.

While he speaks, Dante discovers that the dead can see the future, but not the present. Dante instructs Farinata to tell Cavalcante that his son Guido is alive after all, since Guido can’t see the present to know. Virgil has to pull Dante away, telling him that Beatrice will fill him in on everything he needs to know later; for now, they must keep moving.

Dante and Virgil travel through the Seventh circle of Hell, guarded by the Minotaur, where the violent are punished. It is divided into three subsections and includes warlords, suicides, usurers, and blasphemers.

Riding on the back of the winged monster, Geryon, Virgil and Dante enter the bolgie, or ditches, of the eighth circle of Hell, where they find those who were fraudulent. The circle is divided into ten blogie, the first seven containing all manner of frauds, such as seducers (Canto XVIII), false prophets (Canto XX), hypocrites (Canto XXIII), and thieves (Cantos XXIV and XXV).

The the souls guilty of fraudulent counseling are each surrounded by their own, individual flame in the eighth bolgia. Among them is the famous hero Ulysses (Odysseus to the Greeks), and Diomedes, who assisted Ulysses on many of his attacks against the city of Troy. Dante (the author, as opposed to the character) takes the opportunity to rewrite Ulysses’ story, based on a prophecy given by the famous blind prophet Tiresias. In this version, Ulysses did not spend his final days home in Ithaca, but instead journeyed to the Southern Hemisphere, and the Mount of Purgatory. Ulysses and his men initially rejoiced, but were soon overcome with sorrow as a whirlwind destroyed their ship, killing everyone on it.

The final two bolgie of the eighth circle has the Sowers of Discord, who are dismembered by demons and alchemists, imposters, and perjurers, who are afflicted by many diseases, reflecting the way they were a “disease” on society.

The ninth and final circle of Hell, is reserved for traitors. At it’s center is Judecca, where Lucifer, or Satan is imprisoned in an icy lake. He has great wings that beat, fueling the icy winds of the ninth level of Hell. This wind represents the exhalation of all evil into the world. Judecca is named for Judas Iscariot himself, the disciple who betrayed Jesus to the Sanhedrin in the Garden of Gethsemane for thirty pieces of silver, leading to Jesus’ crucifixion.

The souls who were traitors to their masters are held here, trapped in blocks of ice. Lucifer sits in the middle of the level, where all of the rivers of guilt flow. He beats his wings to escape, but the icy wind freezes him further in place. Lucifer has three faces. In his mouths he chews on Judas, Brutus, and Cassius, all eternal traitors to their masters who trusted them.

Virgil and Dante observe the horrific sight and then begin to climb through the center, climbing over Satan himself, where they pass through the center of the earth’s gravity and exit Hell. The Mount of Purgatory looms before them, and they push on, not wanting to waste any time.