The solar system is a grouping of eight planets and many other objects that are bound together by gravity. At the center of our solar system is a star, the Sun. Our solar system is one of billions in the universe, but is unique in the fact it is the only one we know of that contains life. Each planet has different characteristics that make it uninhabitable for humans, except, of course, Earth.

Student Activities for Solar System Include: 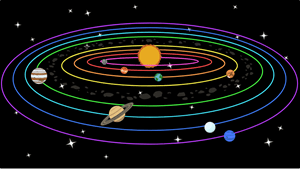 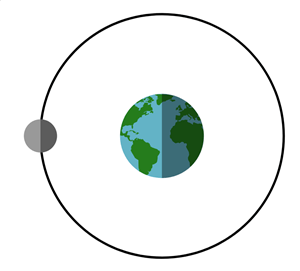 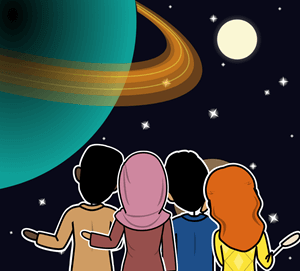 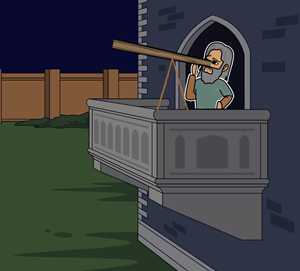 Our solar system formed 4.6 billion years ago, and at the center of it is the Sun, which is an average-sized star about halfway through its life cycle. It is a near-perfect sphere of plasma that emits radiation due to nuclear fusion reactions taking place. Nearly three-quarters of the Sun’s mass is its main nuclear fuel, hydrogen. The Sun is essential for life on Earth because it provides heat and light energy for green plants to photosynthesize. The Sun accounts for over 99% of the mass in the solar system.

Humans haven’t always been sure about the structure of our universe. Until Galileo Galilei, people thought the structure of our universe was different. Aristotle put forward the idea that the Earth was at the center of our universe, and this proposal is known as the geocentric model. People believed this because the apparent motion of the Moon, the Sun and other celestial bodies seemed to be going around the Earth. Using the newly invented telescope, Galileo observed four objects orbiting around the planet Jupiter and came to the conclusion that the Earth was NOT at the center of the universe. For millennia, we assumed our planet was at the center of everything, which gave Earth a huge amount of importance in the eyes of humans. It turns out our planet is very small and insignificant; one of many, many trillions in the universe.

Scientists have spent a lot of time and resources finding out more about the different planets that make up our solar system. Early exploration was done using telescopes, like William Herschel discovering the planet Uranus in 1781. Telescopes only allow us to understand the other planets with limited detail. It wasn’t until space flight had been refined that we were able to find out detailed information about the other planets of our solar system. Scientists sent man-made spacecraft to orbit and even landed on other planets.

There are eight planets in our solar system. In order from closest to the Sun to furthest away they are Mercury, Venus, Earth, Mars, Jupiter, Saturn, Uranus, and Neptune. An easy way to remember the order of the planets is using the mnemonic: My very easy method just speeds up naming.

Note: Pluto was downgraded from a planet to a dwarf planet in 2006 by the International Astronomical Union.

Mercury is the closest planet to the Sun. The planet is named after the Roman god of commerce, who was known for being very swift. Mercury does not have an atmosphere so it doesn’t retain the heat from the Sun. Temperatures can range from 430 °C (800 °F) during the day and -180 °C (-290 °F) during the night. The first spacecraft to visit mercury was Mariner 10. When it visited, it managed to take pictures of about 45% of Mercury’s surface. The surface of Mercury looks similar to our moon, with lots of large craters from objects impacting the planet.

Venus is the second planet from the Sun. It is similar in size to the Earth and it also has a similar composition. Like our planet, Venus has a hot iron core surrounded by a mantle. The planet also has a dense atmosphere of gases composed mainly carbon dioxide; these gases can retain a lot of the Sun’s heat, making it the hottest planet in our solar system with an average temperature of 464 °C (867 °F). Venus, named after the Roman goddess of love, has the least elliptical orbit out of all the planets. After our own moon, it is the brightest object in the night sky. Missions to Venus can be difficult due to the extreme temperatures found on the planet’s surface. There have been several unmanned missions to Venus. In 1970, the Soviet Union landed Venera 7, making it the first spacecraft to land on another planet. Between 1990 and 1994, the Magellan mission orbited the planet and managed to image 98% of the planet's surface.

Our home! Earth is the only planet in the universe we know has life. If other planets have life, we have yet to find it. Earth is the third planet from the Sun and the fifth largest planet.

Mars is also known as the Red Planet due to the color of its surface. Mars was named after the Roman god of war because people thought the planet was the color of blood. After six US and Soviet attempts, the first successful flyby of Mars was in 1961, when the Mariner 4 spacecraft managed to send back some black and white images to Earth. These images were the first images of another planet taken from space. More recently, NASA managed to successfully land the Curiosity rover to look at the composition of its rocks and atmosphere. Scientists are interested in the possibility of liquid water on Mars and the implications this could have for Martian life. Mars is about half the size of Earth and like our planet, it experiences seasons due to a tilt in its axis. The Martian atmosphere is mainly carbon dioxide (96%) with some argon and nitrogen. Temperatures on the Martian surface vary from lows of -143 °C (-225 °F) at the polar caps and 35 °C (95 °F) on the equator during the summer.

While not a planet, the asteroid belt sits between the orbits of Mars and Jupiter. It is made up of fragments of rock and dust. The largest object in the asteroid belt is Ceres, a dwarf planet, which makes up roughly one third of the total mass of the asteroid belt. The belt is not very densely populated, so spacecraft can easily pass through.

Jupiter is the largest planet in our solar system and also has the largest number of moons. It is the fifth planet from the Sun and the first gas giant. It is known for its stripes and swirls on the surface which are caused by the movement of gases in the Jovian atmosphere. Jupiter only has a small 3° tilt, so it doesn’t really experience seasons as Earth and Mars do. The composition of Jupiter is similar to that of the Sun, made up of mainly hydrogen and helium. In 1610, Galileo made observations of four of Jupiter’s moons, which led to disproving the heliocentric model of the solar system. One of the moons that Galileo observed was Ganymede, the largest moon in the solar system.

Saturn is most famous for its rings made of ice and rocks. Other planets, like Jupiter, also have rings, but none are as impressive as Saturn's. Saturn is another planet that is known as a gas giant due to its size and composition. It is made up of mostly hydrogen and helium. Saturn is the only planet in our solar system that is less dense than water. This means it would float on an ocean (if we could find one big enough)! It is named after the Roman god of agriculture and wealth. Saturn has the solar system’s second largest moon, Titan. Titan is slightly larger than the planet Mercury.

Uranus is not only composed of hydrogen and helium, but also ammonia, water, and methane. Its blue color comes from methane in the upper atmosphere that absorbs red light from the Sun, but reflects back the blue light. Uranus has been observed and incorrectly recorded many times as a star or comet. It was first correctly identified as a planet by William Herschel in 1781. Herschel originally wanted to call the planet Georgium Sidus, after the British Monarch King George III, but he wasn’t successful. The planet is named after the Greek god of the sky. It wasn’t until the planet was observed in 1977 that scientists found that Uranus, like Saturn, is surrounded by rings. Uranus is unique in the solar system as its axis is 97° off the vertical, meaning Uranus spins on its side. The first flyby of Uranus was in 1986 when Voyager 2 flew 81,500 km away from the planet.

Neptune is invisible to the naked eye and can only be viewed using a telescope. It was first discovered at the Berlin Observatory in 1846 after a mathematical prediction, making Neptune the only planet not to be discovered empirically. It has a composition similar to that of Uranus. The planet is named after the Roman god of the sea. The outer parts of Neptune’s atmosphere are extremely cold, -235 °C (-391°F), because of its distance from the Sun. After the Voyager 2 spacecraft visited Uranus, it then flew past Neptune, passing the poles 4,800 km away. Its images confirmed the existence of the rings of Neptune.