A Christmas Carol by Charles Dickens

A Christmas Carol by Charles Dickens is set in Victorian England. It is a story of a broken man whose wealth has become his only passion in life. As a young man, Ebenezer Scrooge had love and family in his life, but after many setbacks, he lost the desire to be part of society, part of a family, and in essence, a caring human being. One lonely and cold Christmas Eve, Scrooge goes to bed and is “visited” by four ghosts: his old (deceased) business partner, the Ghost of Christmas Past, the Ghost of Christmas Present and the Ghost of Christmas Future. After an eye-opening adventure, traveling through time and memories, as well as a chillingly, frighteningly lonely visit to his potential future, Scrooge sees the error of his miserly ways and wakes up Christmas morning a new man, full of life, love and excitement to share his wealth and company with the people with whom he shares his life.

Student Activities for A Christmas Carol Include: 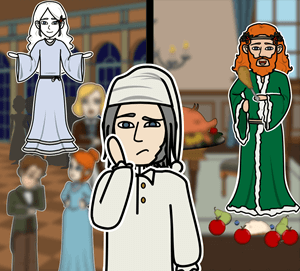 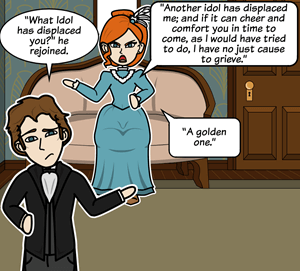 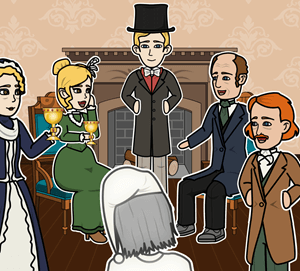 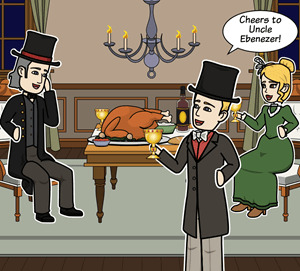 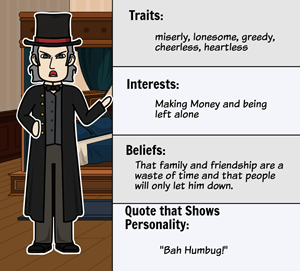 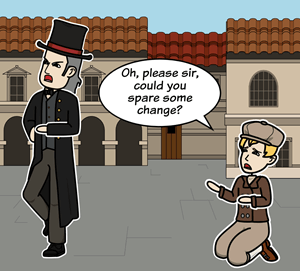 In Victorian England, Ebenezer Scrooge is a wealthy, old man, well known to his family and work associates as a stingy and cold-hearted person. Much to the chagrin of Scrooge’s nephew, who relentlessly tries to find the good in him, Scrooge consistently turns up his nose at invitations to join the family for celebrations with a sterile, “Bah! Humbug!” Also very affected by Scrooge’s harsh ways is Bob Cratchit, Scrooge’s assistant at his money-lending shop. Scrooge is so stingy with his money that he wont allow Cratchit to add coal to the fire, despite the freezing weather.

As the story begins, we learn that Scrooge’s long-time partner, Jacob Marley, has recently died. After a brief introduction to Scrooge’s miserly ways, we see Scrooge go to his home and prepare for bed. While dozing in his chair, Scrooge is awakened by Marley - or more precisely - his ghost. Marley is there to warn Scrooge of what his future will be like, should he not mend his ways and open his heart to the people in his life. Marley tells Scrooge to expect visits throughout the night from three spirits.

The first spirit, the Ghost of Christmases Past, shows Scrooge scenes from his life as a younger man. Scrooge, though holding on to his “Bah! Humbug!” ways, is visibly moved by visions of his family, and of his past love and once fiancee. Despite his attempts to interact with his much happier past, the ghost will not allow it, and he is, all too soon, returned to his bedroom to await the next visit.

The second spirit, the Ghost of Christmas Present, shows what is happening currently with the families of his nephew, and his employee, Cratchit. Scrooge witnesses the hardships that the Cratchit family is going through, including not having enough money for a proper Christmas meal, and the illness of the youngest son, Tiny Tim. Despite all, Tim makes a toast to Mr. Scrooge. Scrooge also sees his nephew’s Christmas celebration where the nephew’s wife talks about how awful Scrooge is, but the nephew sticks up for his uncle. Scrooge is shocked by what he witnesses. But again, questions go unanswered and he is returned to his bed to await his final visit.

Unlike the previous visitations, the Ghost of Christmas Future is fearsome and foreboding. He doesn’t show Scrooge anything heartwarming or touching, rather, he shows him where he will wind up if he doesn’t return to the way he was as a young man. Without a word spoken, the spirit is able to convey that Scrooge is bound to die an unloved, unhappy man, who is remembered as a horrible human being if he continues on his present course. Scrooge is terrified to the point of realizing that he has lost the joy of love and friendship in his life.

Waking with a start, Scrooge doesn’t lose a step. He immediately is reborn, a new man with a generous and joyful attitude. He doesn’t hesitate to purchase the largest turkey in the shop for Bob Cratchit family’s Christmas dinner, happily shocking the entire group. Scrooge also surprises his nephew with a surprise visit, an invitation which he has repeatedly declined.

The story ends with a feeling of redemption for someone who started out life joyfully enough, but through time and toil changed into a “Scrooge”.

Essential Questions for A Christmas Carol

Buy A Christmas Carol by Charles Dickens on Amazon