One of the most iconic leaders of the 20th Century, Nelson Mandela spent 27 years as a political prisoner. He went on to lead his nation as the first black democratically elected leader of South Africa. 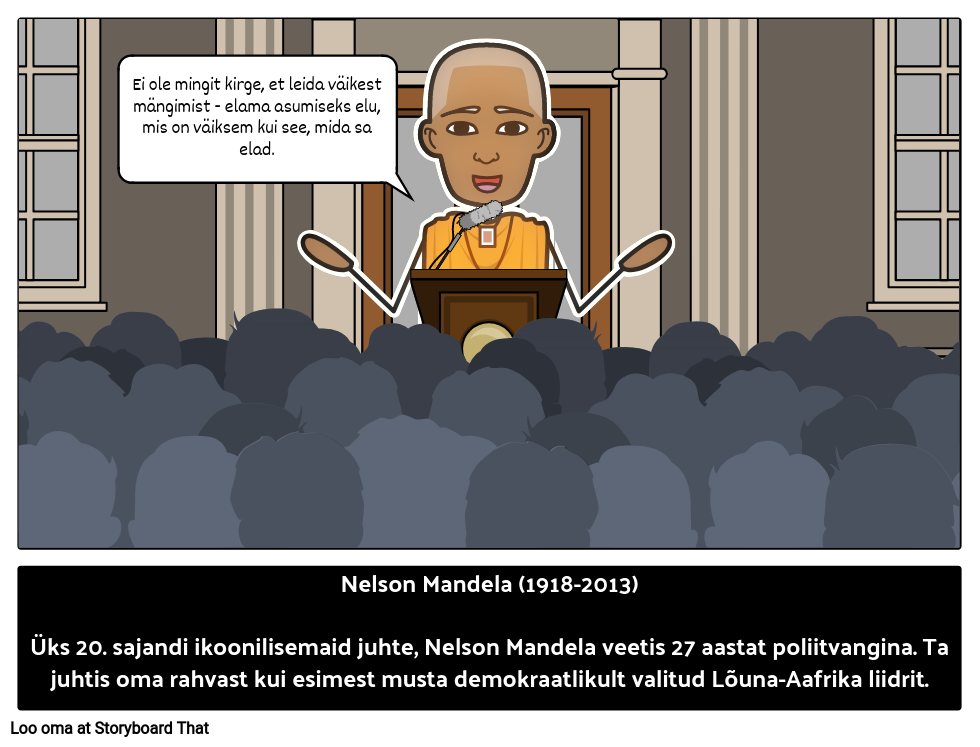 On July 18, 1918, Rolihlahla Mandela was born, and was given the Christian name ‘Nelson’ in primary school. After graduating from high school, Mandela went on to study for a BA degree at Fort Hare University College, but was expelled before he graduated for his part in a student protest. It was at Fort Hare that Mandela met Oliver Tambo, who became a close friend and colleague.

Mandela returned to his home village to find that a marriage had been arranged for him. Unhappy at this prospect, he and a friend left for Johannesburg and Mandela found work as a watchman at a mine. This job was short-lived and he found a job as an articled clerk (trainee lawyer) at the law firm Witkin, Sidelsky, and Eidelman, and went on to study a distance learning bachelor’s degree. In Johannesburg, Mandela started to attend meetings and gatherings of the Communist Party, though he did not become a member.

Later, Mandela studied law at the University of Witwatersrand where he was the only black student. It was during this period that Mandela started to express a greater interest in politics and he helped found the youth wing of the African National Congress (ANC), serving on the Executive Committee. At the time, South Africa was ruled by a white government that imposed a system of apartheid. Apartheid meant meant that racial discrimination was institutionalized, allowing racial segregation in all aspects of daily life and led to a lack of basic rights and amenities for black South Africans. Blacks were not allowed to vote, mixed races could not marry or have romantic relationships, and land ownership rights for blacks were severely restricted.

Following the 1948 election – in which blacks were denied the franchise – the government expanded the existing segregation policies. This prompted Mandela and his associates to publicly oppose the new legislation and promote the use of direct action in the form of strikes, protests, and boycotts. The Executive Committee of the ANC became more radical and Mandela’s influence within the organization grew, and he was appointed as the National President of the ANC Youth League. The ANC cooperated with other groups and commenced the ‘Defiance Campaign’ against the apartheid regime. As he made more public appearances, he attracted the attention of the authorities. In 1952 he was arrested and stood trial and was convicted under the Suppression of Communism Act. He received a suspended sentence, but was banned from attending gatherings and meetings for six months, in an attempt to stifle his growing influence.

When Mandela qualified as a lawyer, he set up his own law firm with his old friend, Oliver Tambo. He started to become frustrated at the lack of progress made against apartheid and became disillusioned with the practice of non-violence. In 1956, Mandela, along with other members of the ANC Executive Committee, was arrested for treason and his trial took place in Pretoria in 1958. The chaotic proceedings dragged on until 1961, when all 156 defendants were acquitted. Following the trial, Mandela set to work organizing the ANC and declared his acceptance that violence was a justified means to challenge the government.

In 1962 Mandela was arrested and sentenced to five years for incitement offences. During his sentence he was further prosecuted in what has become known as the ‘Rivonia Trial’ (1963-4), where Mandela, along with others, was accused of sabotage and conspiracy to violently overthrow the government. At the opening of the defense case Mandela gave his famous ‘I am prepared to die’ speech, where he justified the ANC’s violent struggle, arguing that a ‘government which uses force to support its rule teaches the oppressed to use force to oppose it’. The trial attracted global attention and the world looked on as Mandela was convicted and sentenced to life imprisonment.

In 1964, Mandela started his sentence on Robben Island. He was kept there for 18 years and spent his evenings studying for an LLB with the University of London’s distance learning program. He took part in hunger strikes, associated with other political prisoners and received a number of official visitors, including ministers and MPs from South Africa and abroad. In the world outside Mandela’s prison cell, the anti-apartheid movement was gaining popular support from around the world. In the wake of escalating violence and unrest across South Africa, negotiations for Mandela’s release began.

In 1989 FW de Klerk became President of South Africa and started to release ANC political prisoners. Despite opposition within his own party, de Klerk pushed ahead with negotiations and announced Mandela’s release in 1990. Upon release, Mandela continued his fight against apartheid and received global support. In the first South African election in which blacks were given the right to vote, the ANC swept to victory and chose Mandela as the first black President of South Africa. He led his country until his retirement in 1999, having overseen a transitional justice policy of truth and reconciliation. His involvement in international affairs continued until his death on December 5, 2013 at the age of 95. During his life, he received countless honors and awards in recognition of his fight against inequality and racism. Mandela is a global icon of democracy and justice.

“To deny people their human rights is to challenge their very humanity.”

“Courageous people do not fear forgiving, for the sake of peace.”

“Never, never and never again shall it be that this beautiful land will again experience the oppression of one by another.”