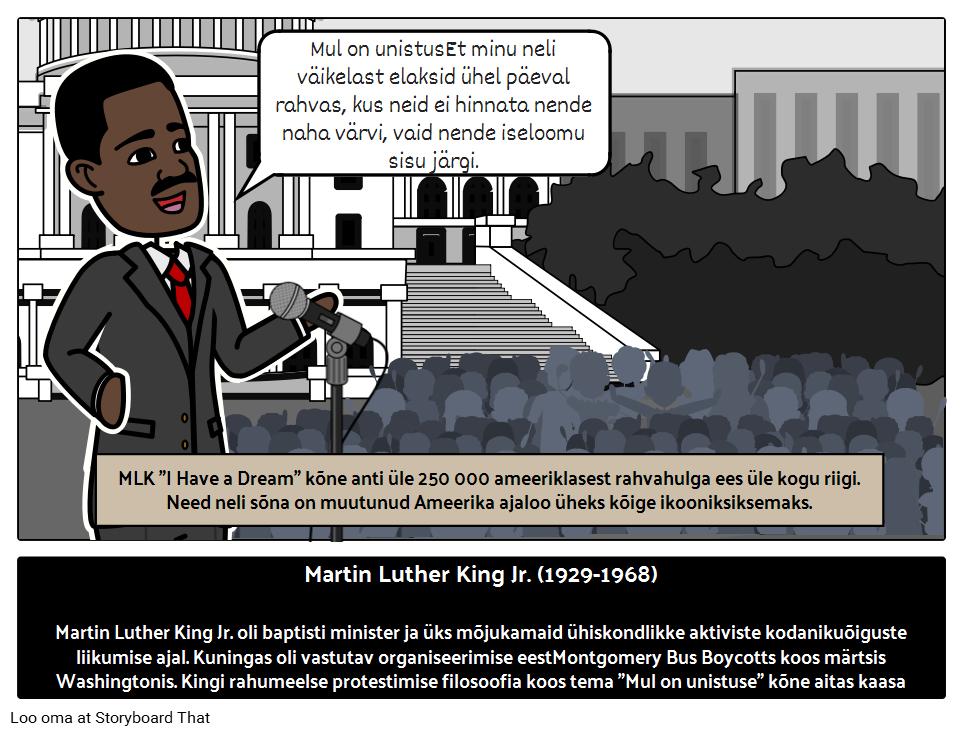 Martin Luther King Jr. was born in Atlanta, Georgia in 1929 into a Baptist family. At the time he received the honor in 1964, he was the youngest recipient of the Nobel Peace Prize at age 35; he donated all of the prize money to the civil rights movement to which he dedicated, and ultimately gave, his life. King went to a segregated public school before he went on to attend Morehouse College where he earned a bachelor’s degree in 1948. He studied theology at the Crozer Theological Seminary and later completed his doctoral studies at Boston University. It was in Boston that he met and married Coretta Scott; they went on to have four children.

In 1954, King followed in his father’s footsteps and was appointed as the Pastor of the Dexter Avenue Baptist Church in Montgomery, Alabama. He had already started to gain prominence within the civil rights movement and was on the Executive Committee of the National Association for the Advancement of Colored People.

King became known as a leader of the US civil rights movement and in 1955, he led a non-violent demonstration in the form of a bus boycott in Montgomery. In the same year, a similar incident involved a black woman refusing to give up her seat on a bus – her name was of course, Rosa Parks. In 1957 King was appointed as the President of the Southern Christian Leadership Conference (SCLC), which he led in opposition to segregation policies in Albany, Georgia and organized peaceful protests in Birmingham, Alabama. King was one of the organizers of the March on Washington where he gave his iconic ‘I Have a Dream’ speech. King’s methods were based upon those of Mahatma Gandhi, who employed non-violent civil disobedience in his fight for India’s independence from Britain.

The year after he won the Nobel Peace Prize, King co-organized the Selma to Montgomery marches, protesting segregationist repression and supporting the right of African American citizens to vote following the introduction of discriminatory regulations which resulted in the disenfranchisement of millions of African Americans. In addition to his civil rights activism, King was publicly opposed to the US war in Vietnam.

While his passionate and fierce opposition to social injustice drew admiration and praise, it also made him many enemies and King was arrested 30 times simply for organizing and participating in non-violent protests against racial segregation and discrimination. His letter written from Birmingham Jail in 1963 eloquently set out his reasons for breaking the law, stating that ‘injustice anywhere is a threat to justice everywhere’.

On April 4, 1968, King was murdered in Memphis, Tennessee as he stood on a hotel balcony. He was shot by James Earl Ray and died later in hospital at the age of 39. Following his assassination, riots broke out across the USA and April 7th was declared a national day of mourning. James Earl Ray confessed to the killing and was sentenced to 99 years in prison. He later retracted his confession and King’s death has drawn much attention from conspiracy theorists.

Shortly after King’s assassination, the US Congress passed the Civil Rights Act 1968. The legislation served as a testament to King’s work and his life’s struggle to achieve equality for all citizens. Martin Luther King Day is celebrated as a US public holiday and recognized globally on the third Monday of every January.

“Every man must decide whether he will walk in the light of creative altruism or in the darkness of destructive selfishness.”

“Love is the only force capable of transforming an enemy into a friend.”

“Our lives begin to end the day we become silent about things that matter.”