Point of View vs Perspective


Perspective, on the other hand, is shaped by a person’s culture, heritage, physical traits, and personal experiences. Perspective can express a different approach to a well-known event or issue, and provides an opportunity for readers to see things in a new way. Perspective can be strengthened by the author’s choice for the narrator’s point of view, but the two are separate literary concepts. While point of view focuses on the who of a story, perspective focuses on the how.

Point of view is the vantage point from which a story is told. It is the stance from which the action and events of the story unfold.

Perspective is a narrator’s attitudes or beliefs about an event, person, or place based on their own personal experiences.

Point of view, or the kind of narration, deals with who is telling the story: first person (I, me, my) or third person (he, she, they). First person narrators have many advantages, including credibility and intimacy. A first person narrator is often more believable because the reader gets access to their thoughts and beliefs. However, there are disadvantages, too. The narrator’s characterizations of events, people, and places will be colored by their attitudes, prejudices, limitations, and shortcomings. In many ways, it makes them unreliable because their observations may not always fully adhere to the truth. It is also difficult for a narrator to directly characterize themself personally. Instead, the reader must form an opinion based on how other characters react to the narrator, and by the narrator’s actions, thoughts, and dialogue.

Third person narration can be split into two categories: omniscient and limited point of view. An omniscient narrator is someone who can access the thoughts and beliefs of many characters without limitations, and can explain past, present, and future events to the reader. This gives an enormous amount of freedom to the narrator. It is advantageous because an omniscient narrator can often interpret the motivations of characters or the importance of events directly to the reader. It also has a disadvantage in its loss of intimacy with the reader.

A limited third person narrator is restricted to one particular character’s experiences and thoughts. It again allows a sense of intimacy and credibility with the reader, but the author is still able to pepper in details that the character may not otherwise know or realize. There is still room for the author to interpret some things for the reader, and to characterize the narrator in more detail.


A note about second person narration

Many students often wonder what second person narration is. The best way to explain this is to have them look at the directions on a quiz or test, or pull out a cookbook, an instruction manual, or anything else that directly instructs the reader. The major pronoun in second person narration is you, with the you being the reader. It is not often used in fiction, other than the choose-your-own-adventure books where the author instructs the reader to make a certain choice and turn to a particular page. (R.L. Stine wrote many of these types of books in the mid-90s with his Give Yourself Goosebumps special edition series. Edward Packard originally created the concept in 1976.)

A great way to get students thinking about the nuances of a narrator’s point of view is to have them create or re-create a story using a different narration format. Have students create a narrative of an event with the three different points of view: first person, third person omniscient, and third person limited. They can also re-tell a story from their reading from another point of view, and see how it changes. Have students present their storyboards, and assess the way that writing their narratives opened up or limited their ability to tell to the story. 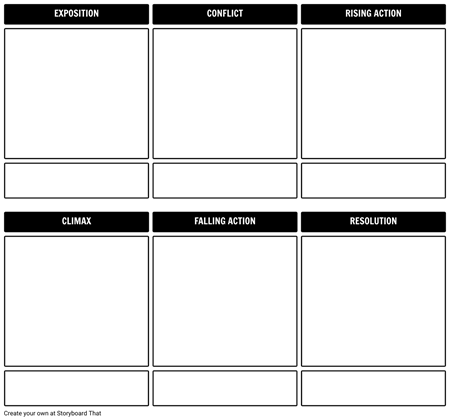 Customize this Example
Start Free Trial*
Point of View Activity
Create a story that utilizes the three narrative points of view: first person, third person omniscient, and third person limited. Choose one moment or event in your narrative and write it from each point of view below each cell. Then, using the scenes and characters in the Storyboard Creator, depict the distinct differences that appear in each point of view. Please be sure to make your scenes eye-catching and neat, and proofread your written work.

Perspective is a narrator’s interpretations of events, people, and places based on their own personal experiences and background. The narrator’s dialogue with the reader reflects these aspects, and may present opinions or different ideas than other characters in the story.

For instance, “Autumn Gardening” by Siu Wai Anderson uses perspective to express a different viewpoint of a well-known event: the atomic bombing of Hiroshima in 1945. The American perspective of this event is typically concerned with the tactical implications of the bombing: it prevented the loss of more American (and Japanese) lives; it finally brought World War II to an end; it showcased the military strength of America as a warning to other countries. However, Mariko’s perspective on the event is quite different. She is left with physical scars from the glass that worked its way into the skin on her face. She has severe asthma that she suspects was also caused by the bombing. She recalls the suffering of the people who were injured, and the tortuous choices she had to make between helping some and leaving others to die. In addition, she has some elements of PTSD, such as nervously looking up whenever a plane flies overhead, and she is plagued by nightmares which has made her feel as if she must keep her distance from others. While the narrative doesn’t explicitly call into question the moral decision to drop the atomic bombs, it does ask the reader to consider the amount of suffering caused by the decision. It adds a human element to a far-away event, and it creates a sense of empathy and understanding for the reader.

Often an author’s choice of point of view for their narrator will help enhance the narrator’s perspective. For instance, Scout’s first person narration of the events that led to Jem’s arm being broken in To Kill A Mockingbird allows the reader to follow the story from the perspective of a child’s innocence. Older readers may pick up on the fact that the daily visits to Mrs. Dubose to read to her, coupled with the lengthening of the timer each day and her physical state, might indicate that she is going through withdrawals. However, Scout, as a young 7-year-old child, does not realize this because she doesn’t understand opioid addiction. Luckily, Atticus steps in to explain it to Scout and Jem – and any other confused readers.

Understanding perspective is crucial for students to be able to analyze and think about the world around them. Perspective is more than just looking at a story from a different angle; it’s realizing that there are multiple angles to every story, especially in everyday life. If they’ve ever heard the old adage, “There’s two sides to every story”, this captures what perspective is all about. In literature in particular, there is a great opportunity to examine two sides to a story by looking at the protagonist versus the antagonist. According to John Rogers, author of several Canadian-based comic book series, “You don’t really understand an antagonist until you understand why he’s a protagonist in his own version of the world.”

Perspective: Re-Telling A Story from the Antagonist's Perspective
From a story we have read, create a plot diagram and fill it in from the antagonist's perspective. You may take some creative liberties to fill in some background for the character's motivations, but stay true to the plot diagram and details of the story whenever possible. Please be sure to make your scenes eye-catching and neat, and proofread your written work.

Other Ideas for Understanding Perspective

Create a Storyboard*
Image Attributions
Find more activities like this in our Middle School ELA and High School ELA Categories!