Human sexuality is a nuanced topic and students may be presented with conflicting information. Tackling the topic in the classroom can be a complex task for anyone, but ignoring the topic isn't a solution. Teens today want to talk about this subject, and the role of the teacher is to facilitate the discussion in an educational and progressive manner.

Creating storyboards to help teach definitions is a powerful visual tool, until it comes to defining people’s identity. Stereotyping what a person looks like for different genders can be offensive. Storyboard That has a solution to this dilemma: stickies. The stickies can be gender neutral or clearly masculine/feminine. This will help to eliminate offensive visuals and push discussion into a positive light. It may not be a wise idea to ask students to create storyboard visuals to match terminology, as they may accidentally make offensive material. However, if you would like students to create their own responses, it may be helpful to have a conversation about stereotypes at the beginning of the class. Below you will find some examples of educational storyboards that can be used for classroom discussion. 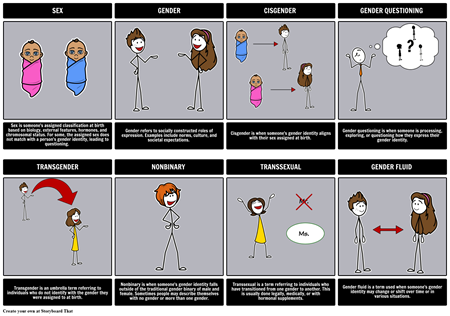 Defining terminology is the first logical step in any unit. Class runs smoothly and safely when students know how to verbalize their thoughts in an appropriate way. When trying to define the different terms for sexuality, some words may seem ambiguous. It’s important for students not to focus on specific definitions of every sexuality or gender identity. In fact, many terms are vague in nature to avoid specific labels. It’s important that students understand that people don’t always fit squarely into one identity and that identities are varied and multifaceted.

The feeling of belonging to something is a powerful thing, and thus some people in the LGBTQ community prefer labels that correspond to their identities. Often, these labels are followed by a feeling of relief as someone finds their identity. On the other hand, others are happy with who they are and don’t feel the need to use labels or to identify themselves with larger groups with similar identities. Not everyone fits into two or three categories. Are labels necessary? No, but they are important.

When discussing new terminology, especially for this topic, it is important to be as clear as possible and not to confuse terms. These visuals in the example storyboards you create allow for clearer understanding and reinforcement of terminology. This topic can be intimidating to talk about for teachers and students, but the simplicity of the characters make the terms less scary.

Expectations of a childhood could be drastically different based on the sex assigned at birth. Assuming gender based on sex assigned at birth begins prior to birth, when a future parent receives gifts specified to a gender norm. Toys given to children help sculpt gender roles. Males may be given trucks and plastic tools, building blocks, or army men. Females may be given princess dresses, plastic kitchen sets, and dolls. All these objects represent societal gender norms.

While it is not a negative thing to give a doll to a child to help reinforce the importance of care-giving, societal gender norms often make it seem so. If, for example, a doll is given to a male child, it may be “frowned upon” as boys playing with dolls is outside of gender norms. As a society, we are doing an injustice by defining and limiting gender roles. These conclusions may not seem like a huge problem at the time, but can really confuse individuals when they start to develop their identity.

How we treat children also has a big impact on gender roles and their identity. When a boy falls and gets a scrape, how is this child usually treated? When a girl falls down and gets a scrape, are they treated any differently? Children internalize messages when they are told to "suck it up" or "rub dirt in it". They either ignore the pain, or decide their pain is not a big deal and move on. This is not a healthy coping mechanism for children and can lead to poor coping skills. Have students think about the long-term impacts of gender roles in society by creating a storyboard. Visuals may help lead to discussions and thought-provoking answers.

This activity asks students to think critically about what the long term outcomes are in each situation. By modifying this activity and asking the students to create their own examples of gender norms, students will be able to visualize their own similar experiences, which creates a reflection assessment. Below is an example storyboard that students can fill in directly, either on their own or as part of a class discussion.

The internal conflict experienced by students who are questioning or are LGBT-identified might be boundless and overwhelming. Students who do not identify themselves as a part of the LGBTQ community may feel a bit lost or outsiders in this topic. At times, they may feel like they do not know what to say. Understandably, they may not want to offend anyone or they may not know how to help. Introducing the three A’s is a good starting point for students to understand the roles they can play. Students who are not a part of the LGBTQ community can be an ally, an advocate, and someone who accepts differences.

Being an ally for the LGBTQ community is an important role. An ally is supportive to members of the community by being open to conversing in an honest way. It involves listening in a judgement-free manner while maintaining respect for the person and entrusted information. It takes a certain amount of courage to be an ally. Today there still exist prejudices against the LGBTQ community and being an ally for the minority is a step in the right direction. Below is a storyboard that shows students ways to be an ally.

Being an advocate is no easy task. This is someone who stands up to oppression of the LGBTQ community, is a role model for their peers, and changes the environment to a more accepting one by joining or starting organizations while reporting harassment of LGBTQ individuals. Below is a storyboard that shows students ways to be an advocate.

It is also important for students to learn acceptance of individual differences, but this is the least they can do. Someone who accepts people for who they are and understands that gender identity is not tied directly to sex assigned at birth is a learning objective for this discussion. Below is a storyboard that shows an example of how easy it can be to be accepting of differences.

It is easier said than done to be an ally, advocate, or accepting of differences; just defining what they are isn’t enough. Turning information into action takes practice and confidence. Showing different ways to be one of the three A’s makes it seem easier. Asking students to make their own storyboards with themselves performing some of the three A’s builds the confidence to act in reality.

Students are a product of their environment and the intolerance of differences is a learned behavior. Creating an accepting classroom setting for all students will help push out harassment and foster understanding. If someone can learn to discriminate, they can learn to be more accepting. A teacher's biggest role in facilitating a safe classroom environment is teaching ways to be more accepting. Being an ally, advocate, or accepting others are just a few ways to support the LGBTQ students and community. Understanding the community, how to support them, and what supporting their peers looks like are just a few ways to teach this topic in your classroom.

Outside of the activity suggestions above, you may want to create posters, PSAs, or worksheets to supplement class discussions. While these aren't necessary components to teaching gender and sexuality in the classroom, they can serve as additional ways to reinforce information and, in the case of worksheets, provide students with a place to actually write their thoughts somewhere that won't be seen by other students (if they feel uncomfortable or need to share information).

Be sure to check out all of our resources on the Health and Wellness page!