Language which conveys meanings that are interpreted imaginatively rather than literally


How is Figurative Language Used?

The Main Types of Figurative Language

A simile is a comparison between two unlike things using the words “like” or “as”. It is a way to draw a connection between two ideas or things and create a deeper level of meaning for the reader. Known for his use of similes in The Tragedy of Romeo and Juliet, William Shakespeare uses a simile to describe Romeo’s astonishment at Juliet’s beauty: “O, she doth teach the torches to burn bright! / Her beauty hangs upon the cheek of night, / Like a rich jewel in an Ethiop’s ear.” In this simile, Romeo is beginning the motif of light vs. darkness, where Juliet is always a shining light and everything becomes dark around her.

In addition to the typical simile, there are also Homeric or epic similes which are extended passages that develop an intricate and ornate simile. For example, in The Odyssey, Homer describes the staking of the Cyclops’ eye in elaborate and almost painful detail: "...its crackling roots blazed and hissed - as a blacksmith plunges a glowing ax or adze in an ice-cold bath and the metal screeches steam and its temper hardens - that's the iron's strength - so the eye of Cyclops sizzled round that stake."


In this example, the plunging of the hot stake into Polyphemus’ eye caused a blazing hiss akin to a blacksmith plunging his hot steel into water. Gross! But, Homer’s epic simile is so vivid that it is difficult to forget.

Unlike a simile, a metaphor compares two unlike things or ideas without the use of “like” or “as”; the connection between the two is more implied than explicitly expressed by the author. The purpose of a metaphor is to establish a deeper connection and another layer of meaning to a character, the plot, or the theme. A simple metaphor can be found in Edgar Allan Poe’s “The Raven”, when the narrator observes, “And each separate dying ember wrought its ghost upon the floor”, referring to the dying embers of the fire as turning into ghosts, much like the ghost of the memory Lenore, which will be visiting him soon.


An extended metaphor is more complex than a simple metaphor, in that it is typically expressed throughout the entirety of a work. Emily Dickinson is famous for using extended metaphors, such as in her poem “Because I Could Not Stop for Death”, which uses a journey with Death personified to mirror the typical journey of life from childhood to inevitable death. Extended metaphors are sometimes also called allegories, although allegories tend to be used with larger works and novellas, such as Animal Farm by George Orwell.

Personification is the assigning of human qualities to an inanimate object, person, animal, or abstract idea. Personification is used to simplify a more complex concept, to provide humor, or to provide a more clear look at a complicated idea or situation. Personification is most often used in poetry to create an image or to help establish mood. Robert Frost uses personification in his poem “Stopping By Woods on a Snowy Evening” when he gives the horse human qualities: “He gives his harness bells a shake / To ask if there is some mistake.” Horses do not ask questions, but the horse’s confusion seems to mirror the narrator’s own confusion and reluctance to keep moving.

Symbolism uses objects, characters, and motifs to create a pattern of deeper meaning that stands out in the reader’s mind. It typically uses something physical to represent a broader, more abstract idea. Symbols typically illuminate the deeper message or theme in a work, and sometimes they access common archetypes to create a universal understanding of their meaning. In “The Scarlet Ibis” by James Hurst, the ibis itself represents little brother Doodle: traveled a long way to a place it doesn’t belong, elongated neck, crooked legs, and a red tinge that suggests a weakness that can’t be overcome.

A hyperbole is an obvious exaggeration or overstatement to make a point. It is not meant to be taken seriously, and usually when explored, reveals a deeper meaning. Hyperboles occur most often in poetry, but they also appear in common cliches or sayings. For example, “The shot heard round the world” is a phrase used to describe the first shot fired by the British soldiers on unarmed Colonial citizens which began the Revolutionary War. While the actual gunshot was not heard around the world, the implications of that gunshot changed world history. Macbeth also feels he will never be cleansed of his murderous deed of killing King Duncan in William Shakespeare’s The Tragedy of Macbeth. Macbeth laments, “Neptune’s ocean wash this blood / Clean from my hand? No. This my hand will rather / The multitudinous seas incarnadine, marking the green one red.” In this scene, not even the oceans can wash Macbeth’s hands of King Duncan’s blood.

Imagery accesses all of the reader’s senses in order to create powerful mental experiences of characters and events, as well as emotional responses to those events. Imagery uses sight, sound, taste, touch, and smell descriptions to cue a reader in on mood, tone, and theme. Imagery is often created by other kinds of figurative language, including metaphors, similes, onomatopoeia, symbolism, and personification. In the novel Great Expectations by Charles Dickens, Dickens paints a grim picture of the fateful morning when Pip sets out to deliver the food and file to the convict, setting the dreary mood for the reader to highlight Pip’s fear and isolation in this ordeal. Pip recalls, “It was a rimy morning, and very damp. I had seen the damp lying on the outside of my little window, as if some goblin had been crying there all night, and using the window for a pocket-handkerchief. Now, I saw the damp lying on the bare hedges and spare grass, like a coarser sort of spiders’ webs: hanging itself from twig to twig and blade to blade.” Dickens makes use of similes to create the vivid visual imagery of the dank and rimy morning on the marshland.

An oxymoron combines two contradictory words or ideas into one phrase to highlight an idea or a problematic connection for the reader. In poetry, oxymorons are used for more of an artistic effect, to create powerful contradictory images in the mind of the reader. Shakespeare was well-known for such contradictions, especially in his play The Tragedy of Romeo and Juliet. Some of his most famous oxymorons from the play occur when Juliet initially believes that Romeo is a cold-blooded murderer, but also can’t believe that someone so beautiful could commit such an ugly deed. She cries, “Beautiful tyrant! Fiend angelical! / Dove-feathered raven, wolvish-ravening lamb! / Despised substance of divinest show / Just opposite to what thou justly seem’st.”


Oxymorons are simpler versions of paradoxes.

A paradox is a statement containing two seemingly contradictory ideas, but is true nonetheless. It is a stronger version of an oxymoron in that it prompts the reader to see both sides of a truth at the same time. George Orwell uses paradoxes in his novel 1984, with the mantras of Big Brother: “War is Peace”; “Freedom is Slavery”; “Ignorance is Strength.” While these may not make sense in the current world, in Oceania, war maintains the status quo; those who follow the Party line are left alone, and those who don’t know too much don’t suffer from seeing all of the contradictions around them.

Onomatopoeias are words that imitate sounds. Onomatopoeias are primarily used in poetry, and are often used to create imagery, symbolism, or repetition, which often point to the theme or message of the poem. Edgar Allan Poe uses onomatopoeia to establish a mood of content and then terror in his poem “The Bells”, which become increasingly threatening as death draws nearer:


“Hear the loud alarum bells,
Brazen bells!
What a tale of terror, now, their turbulency tells!
In the startled ear of night
How they scream out their affright!
Too much horrified to speak,
They can only shriek, shriek,
Out of tune…
How they clang, and clash, and roar!”

An apostrophe, in figurative language, is the direct address to an absent person, object, or abstract idea. An apostrophe is often used to begin a poem to establish the primary subject or mood. It is also a way for the author to use personification to clarify a complex idea, or to bring any character into the work. One of the most well-known examples of apostrophe is in Shakespeare’s The Tragedy of Macbeth where Macbeth’s dagger comes to life, personifying his own conscience as he prepares to slay King Duncan. Macbeth, both terrified and mesmerized, says, “Is this a dagger which I see before me / The dagger toward my hand? Come, let me clutch thee! / I have thee not, and yet I see thee still.”

Identifying figurative language is an important skill students must acquire and use in order to understand and appreciate the layers of meaning an author will set out for a short story, novel, or poem. Using a template like the ones below, have students locate as many figurative language elements as possible in the work being analyzed, and have them create a visual depiction of that figurative language being used.

You can also create figurative language worksheets for students to use digitally or offline. They can visually organize information, which can be perfect as a way to prepare for a short essay or paper. You can easily tailor the worksheets to the activity or project. 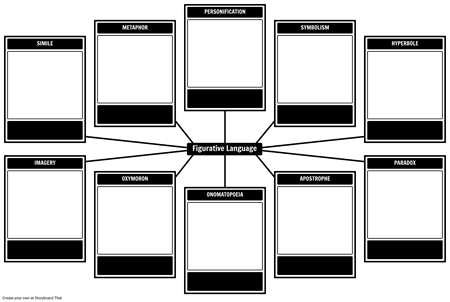 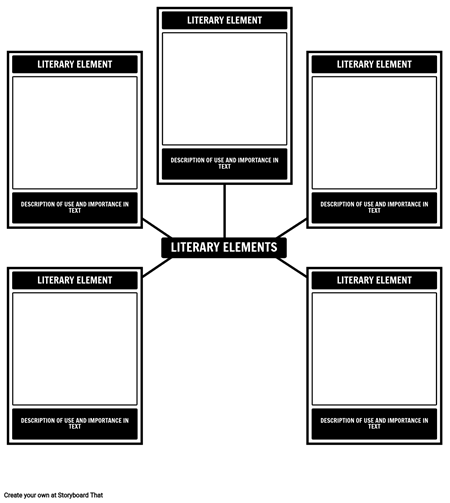 Find more activities and lesson plans like this in our High School ELA Category!
View All Teacher Resources